EILEEN TO APPEAR ON THE ONE SHOW!

Eileen Younghusband (author of 'One Woman's War' and soon-to-be-released 'Men I Have Known') has just completed filming for the BBC’s The One Show. She was approached by the TV show’s producers to talk about her World War II experiences, in particular her work in the Filter Room. Here's how her day of filming went last week:

"It was a day starting at 9 o'clock filming with the presenter Marty Joplin in my house and then a 12 o'clock we had lunch in a village by the Severn Bridge. Transferring to a Land Rover, we headed into the depths of the countryside across a very muddy field which was licensed for rocket launching. We then got stuck in the mud in the middle of a vast field and had to be pulled out by the farmer and his tractor!As we waited for the rocket to be set up and launched, it was glorious sunshine but just when it was ready, torrential April showers and a thunderstorm arrived with vivid lightening. so we filmed under an umbrella. The first two rockets failed to ignite so we had another wait back in the Land Rover. The third was successful but we again filmed in pouring rain. 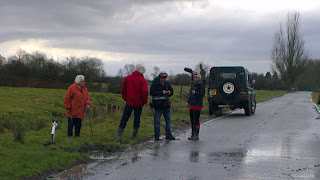 We did two filmings with a rocket. The second successful one launched well but it should have had a small parachute emerge as it landed so as not to break the rocket – this one failed to open! Fortunately this part was not filmed but the rocketeers were left with a very expensive ruined rocket! After that, we filmed in the Land Rover discussing maths whereupon the sun came out and an enormous rainbow appeared.

We moved to a narrow lane where they set up a model V2 with its correct markings, nose down in the grass, and we then explained all the calculations, waving my slide rule in the air – I was told to explain it clearly and simply! Unfortunately Marty’s mike was not working and then the camera got rain on its lens but we eventually did two good takes. Finally the order came to WRAP! 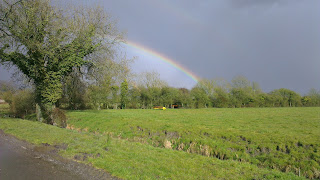 By then it was 6 o'clock. I was driven home via Newport railway station to drop off Marty, arriving at 7 o'clock in the evening, absolutely shattered.... Quite a day!"

The date of broadcast has yet to be confirmed, but we will post an update as soon as we know.