Looking forward to a new set of adventures in 2012 - already I have heard from the Association of Flight Controllers, the current name for Officers doing the work of Filterers in WW2 that I have been made an Honorary Member. I am thrilled with this honour and look forward to meeting modern day practioners of the art of calculating and vectoring ai craft. I am also ecstatic to learn that the proposed museum at Bentley Priory, the headquarters of Fighteer Command and the air defence of Great Britain in WW2, is not only going to recreate the Filter Room as used in the 1940s but there is a proposal to create a memorial window to the WAAF who served in Radar, Ops Rooms and Filter Rooms. This means we have to raise up to £10,000 for its preparation but I know we will do it. Any ex-Filter Room personnel who read this blog are welcome to contact me at le.croissette@virgin.net if they are willing to support us.

It is time that the vital work behind the scenes done by members of the WAAF was recognised. 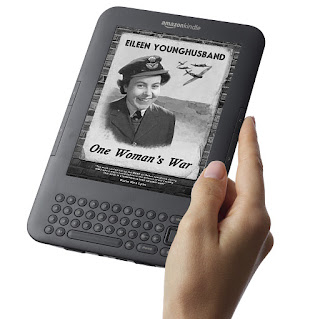 You can now read the Kindle version of One Woman's War. Available from the Kindle store, you can instantly purchase and download them and start reading right away! So, if you've missed the Christmas post, or have just treated yourself to Amazon's latest eReader, why not give them a try?

These books are also available in all other eBook formats, including Kobo and iBooks (accessible from your iPad or iPhone).