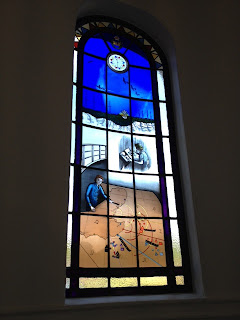 Eileen has opened the first memorial window commemorating the Dowding system and the work of the Top Secret Filter Rooms.

After an introduction by Air Commodore Gordon, the window was unveiled by Eileen, which represents the WAAF airwomen and Officers who worked on the Dowding system’s use of Radar. Air Chief Marshal Sir Brian Burridge then explained the pivotal role played by the system and especially the Filter Room during the Battle of Britain and the Blitz.

Eileen was thrilled to be involved. Her book One Woman's War helped to make the public more aware of the importance of the Dowding System and is partially responsible for the creation of the window. She said: “Together with a fellow WAAF Officer I helped with the design of the window. This took me back to those dark days of war. As I removed the Union flag covering the brass plaque with my name on it, I thought of all who had worked with me and I admit there were tears in my eyes.”

The work of the Filter Room women was kept secret for thirty years. Eileen's book One Woman’s War reveals the truth about these forgotten wartime women, and has recently been nominated for The People's Book Prize. Winston Churchill stressed the little-known importance of this work. He is famous for saying: “All the ascendancy of the Hurricanes and Spitfires would have been fruitless but for the system known as the Dowding System.”

A documentary about Eileen's experiences will be shown on ITV Wales in early November.

Eileen is currently moving forward with her next title, Men I have Known, about the men she has met throughout her life, ranging from Winston Churchill to Dylan Thomas and the tyrant, Idi Amin. It is due to be published by Candy Jar Books later this year.
Posted by Candy Jar Films at 06:38 No comments:
Email ThisBlogThis!Share to TwitterShare to FacebookShare to Pinterest
Labels: 11 group filter room, battle of britain, bentley priory, blitz, dowding system, radar, top secret, WAAF, window

Here’s a review about 'The Bletchley Circle' by Jacob Rudge at Candy Jar. The views are not necessarily mine, but he seems to have liked the programme.


Filterers, plotters, translators, V2 rocket hunters; the women of World War II provided vital services to help secure an Allied victory – with their achievements being often overlooked. However, to set the record straight ITV has launched a brand new drama, ‘The Bletchley Circle’.


Set in the post-war Britain of 1952, ‘The Bletchley Circle’ follows former code-breakers Susan, Millie, Lucy and Jean once they have adjusted to the normality of peacetime. After using her code-breaking skills, and practically shortening the war single-handedly, it’s not surprising that Susan is finding civilian life a bit tiresome, but when a serial killer turns up everything changes. Shunned by the police, Susan quickly realises that the only way to crack the murders, and catch the killer, is to reunite with her former friends.


With the set-up established it was worrying to see that ‘The Bletchley Circle’ came close to falling into a clichéd trap – each of the other women possessing a particular skill – but the well-formed cast and some unexpected 50s noir flourishes helped to lift an interesting idea above the mundane and predictable.


Despite any issues to be had with the production itself, it truly is wonderful to see the women in the limelight during such an historic time, and in strong roles, that prove they are as good as – if not better than – the men. If the series can maintain its intelligence and the exciting chemistry between its four leads, there is no doubt that these new sleuths could be around for a while.

The next episode will be broadcast on ITV1 at 9pm on Thursday. To watch the programme for the next 7 days click here.
Posted by Candy Jar Films at 03:02 No comments:
Email ThisBlogThis!Share to TwitterShare to FacebookShare to Pinterest
Labels: Bletchley Circle Park ITV code-breakers TV Eileen Younghusband enigma machine detective series julie graham anna maxwell martin sophie rundle rachael stirling

VOTE FOR ONE WOMAN'S WAR IN THE PEOPLE'S BOOK PRIZE!

Candy Jar Books is proud to announce that two of its books have been nominated for a People's Book Prize!

Founded by best-selling author Dame Beryl Bainbridge, The People's Book Prize is a national competition aimed at finding, supporting and promoting new and undiscovered works: a truly democratic book prize with no panel of judges but decided exclusively by the public. 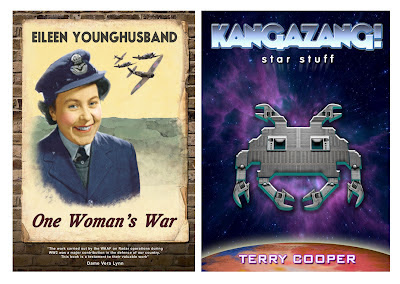 Vote for One Woman's War
Vote for Kangazang! Star Stuff