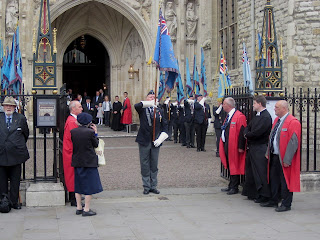 Last month Eileen attended the 72nd annual Battle of Britain Memorial Service at Westminster Abbey. Upon her arrival, Eileen was greeted and saluted by a guard of honour and her walk into the Abbey was framed by lines of RAF officers. She was then escorted to her reserved seat by current members of the RAF. She was seated with fellow veterans of the RADAR and Filter Room and next to fellow author Patricia Robbins (also known as, Claire Lorrimer). A number of pilots from the Battle of Britain and their families were also in attendance. The service was instigated in 1943 and originally held in St Paul’s Cathedral until the Battle of Britain Memorial Window was unveiled in the Abbey by King George VI in 1947.

The Chaplin in Chief, Raymond Pentland, gave the sermon, making reference to plotters and other members of the Dowding system that served in the Battle of Britain. The veterans were also honoured by the presence of royalty – the Prince of Wales and the Duchess of Cornwall. Eileen really enjoyed the day and valued the opportunity to view the commemorative window at such a prestigious event.